To optimize women’s fertility, taking better care of their bodies is a good first step. But what else can women do to improve their odds of having a baby?

The most important advice for a woman who wants to get pregnant is to get to know her body, specifically her menstrual cycle, said Dr. Ellen Turner, a reproductive endocrinologist and infertility specialist and medical director of the in-vitro fertilization program at Northwestern Medicine’s Fertility and Reproductive Medicine department in Chicago.

“It’s important to know how far apart her cycles are so she can more accurately time intercourse to try to get pregnant,” Turner said.

Here are 10 tips that may help increase a healthy woman’s chances of becoming pregnant.

A woman who wants to have a baby should monitor whether the first days of her periods tend to come the same number of days apart every month, which is considered regular. Conversely, her periods may be irregular, meaning her cycle lengths vary from month to month. By tracking this information on a calendar, a woman can better predict when she might be ovulating, which is the time when her ovaries will release an egg every month.

A woman’s egg is fertile for only 12 to 24 hours after its release, according to the American Pregnancy Association. However, a man’s sperm can survive in a woman’s body for up to five days.

Women with regular cycles ovulate about two weeks before the arrival of their periods, Turner said. It’s harder to predict ovulation in women with irregular cycles, but it usually occurs 12 to 16 days before the start of her next period.

There are several methods women can use to help determine their most fertile days each month.

Home ovulation-prediction kits can take some of the guesswork out of figuring out when a woman is ovulating. Sold at drug stores, the kits test urine for luteinizing hormone, a substance whose levels increase each month during ovulation and cause the ovaries to release an egg. The three days right after a positive test result are the best time for couples to have sex to increase their odds of becoming pregnant, reports the American Pregnancy Association.

Another method to predict ovulation is to track cervical mucus, which involves a woman regularly checking both the amount and appearance of mucus in her vagina. Just before ovulation when a woman is most fertile, the amount of mucus increases and it also becomes thinner, clearer and more slippery, according to the March of Dimes. When cervical mucus becomes more slippery, it can help sperm make its way to the egg. A study published in the journal Fertility and Sterility found that women who checked their cervical mucus consistently were 2.3 times more likely to get pregnant over a six-month period.

3. Have sex every other day during the fertile window

The “fertile window” spans a six-day interval, the five days prior to ovulation and the day of it, according to the American Society for Reproductive Medicine. These are the days each month when a woman is most fertile.

Some women are turning to new technology tools, such as fertility tracking apps and websites, to help them keep tabs on when they may be more likely to conceive, but a study done in 2016 suggests the apps may not be that accurate.

Research has shown that there hasn’t been a big difference in pregnancy rates between couples who had sex every day during the “fertile window” (37 percent) compared with couples who did it every other day (33 percent), Turner said. “And having sex every other day might be easier for a couple to pull off,” she added.

There are plenty of common misconceptions and old wives’ tales about conception. For example, there’s no evidence that sex position will influence a couple’s chances of having a baby, nor does a woman lying on her back for a certain amount of time after intercourse increase the odds of conceiving, Turner told us.

But she said there are some water-based vaginal lubricants that can decrease the movement of sperm, so Turner recommended using Pre-Seed rather than Astroglide or K-Y Brand Jelly when lubrication is needed.

4. Strive for a healthy body weight

Being too heavy can reduce a woman’s odds of conceiving, but being too thin can make it even harder to have a baby.

Having too much body fat produces excess estrogen, which can interfere with ovulation. Losing 5 to 10 percent of body weight before a woman starts trying to get pregnant could improve her fertility, according to the American Society for Reproductive Medicine.

A study done in 2017 found that couples in which both partners are obese may take from 55 to 59 percent longer to become pregnant, compared with couples who are not obese.

Women who are too thin might not be getting regular periods or could stop ovulating. 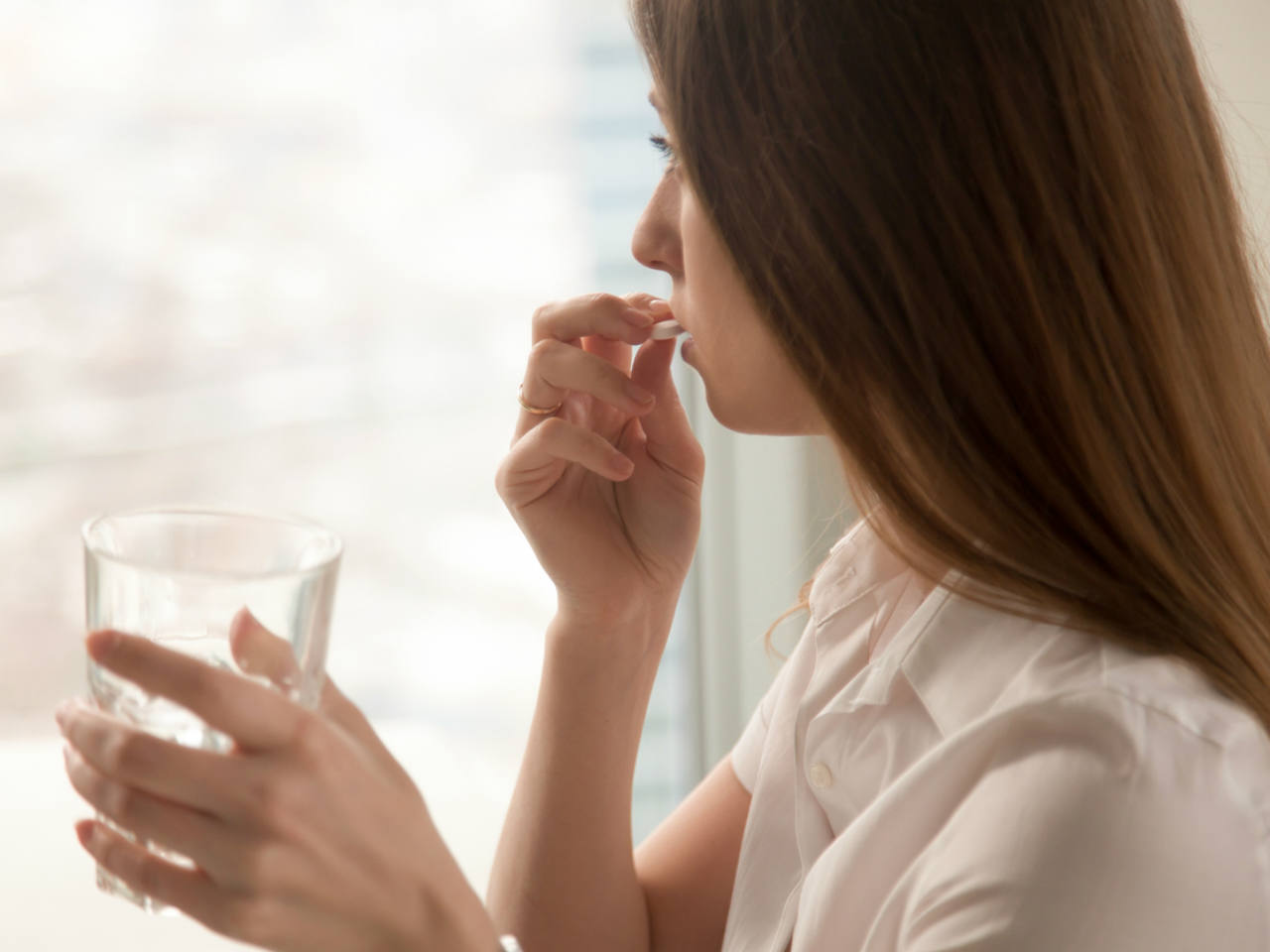 Turner recommends that women who are attempting to conceive start taking a prenatal vitamin even before becoming pregnant. This way a woman can find one that’s more agreeable to her system and stay on it during pregnancy, she said.

Another possibility is to take a daily multivitamin, as long as it contains at least 400 micrograms (mcg) per day of folic acid, a B vitamin that’s important for preventing birth defects in a baby’s brain and spine, Turner said.

The Centers for Disease Control and Prevention urges women to take 400 mcg of folic acid every day for at least one month before getting pregnant to help prevent birth defects.

Getting a head start on folic acid supplementation is a good idea because the neural tube develops into the brain and spine 3 to 4 weeks after conception occurs, before many women may realize they’re expecting.

Although there may not be a specific fertility-promoting diet, eating a variety of healthy foods can help prepare a woman’s body for pregnancy by giving her adequate stores of critical nutrients such as calcium, protein and iron. This means eating a variety of fruits and vegetables, lean protein, whole grains, dairy and healthy sources of fat.

Besides taking a supplement containing folic acid, a woman can also obtain this B vitamin from foods such as dark green leafy vegetables, broccoli, fortified breads and cereals, beans, citrus fruits and orange juice. [Related: High Cholesterol Levels May Make It Harder to Get Pregnant]

When trying to get pregnant, eat lower amounts of high-mercury fish, such as swordfish, shark, king mackerel, and tilefish. And limit albacore (white) tuna to 6-ounces per week to reduce exposure to this toxic metal, the Food and Drug Administration recommends.

Also, go easy on caffeine: Consuming more than 500 milligrams of caffeine a day has been linked with a decrease in fertility in women. Having 1 to 2 cups of coffee, or less than 250 mg of caffeine, per day before becoming pregnant appears to have no impact on the likelihood of conception, according to the American Society for Reproductive Medicine.

7. Cut back on strenuous workouts

Being physically active most days of the week can help a woman’s body prepare for the demands of pregnancy and labor. But getting too much exercise or doing frequent strenuous workouts could interfere with ovulation.

Doctors see a lot of menstrual disturbances in women who exercise heavily, and a lot of times these women need to cut back on their workouts if they want to become pregnant, Turner told us.

8. Be aware of age-related fertility declines

As women get older their fertility decreases because of age-related changes in the ovaries that cause a decline in the quantity and quality of her eggs. With advancing age, there’s also an increased risk for some health problems, such as uterine fibroids, endometriosis and blockage of the fallopian tubes, which can contribute to a loss of fertility.

9. Kick the smoking and drinking habits

Smoking can lead to fertility problems in both women and men. Chemicals found in cigarette smoke, such as nicotine and carbon monoxide, speed up the loss rate of a woman’s eggs, according to the American Society for Reproductive Medicine.

Smoking ages a woman’s ovaries and depletes her supply of eggs prematurely, according to the Mayo Clinic.

It’s also a good idea for women to stay away from secondhand smoke, which may affect their chances of becoming pregnant. Marijuana and other recreational drug use should also be avoided while trying to conceive.

It’s safest for a woman to avoid alcohol when she is hoping to become pregnant. A woman should also stop consuming alcohol if she stops using birth control because she wants to get pregnant.

However, a 2017 study found that about half of pregnant women in the United States drink alcohol around the time they become pregnant or in early pregnancy, usually before they know they are expecting.

Once a woman becomes pregnant, there’s no safe amount of alcohol, Turner said.

Both the woman and the man should consider having an infertility evaluation if the woman is 35 or older and has not become pregnant after six months of having sex regularly without using birth control, Turner said.

Turner also recommended that a woman who is under 35 and her partner should consult a fertility specialist if she has failed to become pregnant after one year of having unprotected intercourse on a regular basis.